George Wallace: An Enigma – Click here to read the article on Ezine Articles 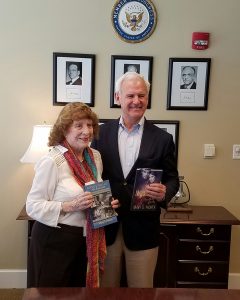 On July 31, 2017, Mary S. Palmer presented Congressman Bradley Byrne with a copy of her recent books. In TIME WILL TELL (2017) is a blurb about Byrne’s presenting her with a plaque at the Mobile Carnival Museum October 15, 2014, for her short story about Mobile’s Mardi Gras, RAISIN’ CAIN, which won the Southeastern Literary Tourism Initiative Award of $500. Congressman Byrne also commented on the new genre of Tourism Writing on the floor of the House of Representatives and his remarks are permanently preserved in the Congressional Record Proceedings and Debates of the 113th Congress, Second Session, September 18, 2014. In addition, Mary presented him with her biography of George Wallace, GEORGE WALLACE: AN ENIGMA (2016).

From Faulkner Community News – February 2017
AN AUTHOR AMONG US

Mary S. Palmer is an establisher author and a member of the faculty of Faulkner University where she is an English lecturer.

Mary is an avid traveler who loves adventure. She has visited every state in the U.S. and every continent except Antarctica. Wherever her travels take her, she seeks out people to engage and interact with and loves to hear their stories. Drawing from those experiences, she weaves different elements into her writing.

Paperback and e-books are available for GEORGE WALLACE: AN ENIGMA on Amazon.com and paperbacks and hardbacks are available at www.georgewallacebook.com and at www.maryspalmer.com